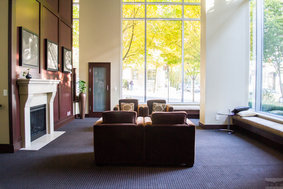 There are many gorgeous Coal Harbour apartments for rent. Its a very popular place to live because the views of the ocean and mountains are second to none, Stanley Park is at your doorstep and while you are in the downtown core its quiet and peaceful at night. Yaletown rental apartments are also popular because of the convenience and lifestyle offered but Coal Harbour lends itself to the more mature, sophisticated high end tenants. Square footage is generally higher in Coal Harbour than other Downtown Vancouver apartment rentals and the homes are generally finished with top of the line appliances and amenities. Apartment vacancies aren’t as plentiful as other areas as people generally love their Coal Harbour rental apartments and are loathe to move. We are at the time of the year when its the most difficult to secure a tenant. People usually are not too thrilled at the prospect of moving on December 1 or January 1. If there’s a chance of your Coal Harbour furnished apartment for rent being vacant over the holidays then sometimes a one or two month tenancy should be considered. Sometimes we have to think on the fly and roll with the punches in the Coal Harbour property management game. Once in a while, a tenant will break their lease early or put you in a vulnerable position, like vacating your home in mid November. A downtown rental agency should be able to present you with options so you can ride out these tough times with a short term tenancy solution so your rental income bottom line shouldn’t be affected greatly.