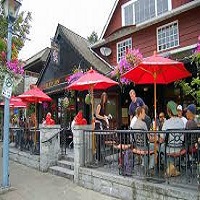 Vancouver Canucks playoff season has begun and I for one am ready to swing my white towel high over my head. The regular season is always fun but there is nothing like watching a playoff game in person. The arena is packed, the excitement palpable and the warm beer way over priced. The playoff’s are always a great excuse to leave work early and hit your local pub to support your favourite team. Renting an apartment in West Vancouver, I live 2 doors down to from my absolute favourite English pub. The best staff in the world!       http://www.redlionbarandgrill.com/

For Canada, it’s fantastic to see 5 out of the 16 playoff teams are Canadian. Yeah us!!!! After all, it is our game! For our Canucks, we missed the playoffs last year, which was a shocker! Not because we played well, on the contrary, but because we had made it for the previous 5 years and 2 as residing President Trophy winners, so it hurt like hell. But we’re back and we’re ready, so bring it on Calgary! It’s been 6 looonngg years for the Flames since they graced the playoff ice and it will be an exciting match up for sure. For all the latest news on the playoffs click on this link   http://www.nhl.com/ice/stanleycup.htm

Our twins seem pumped and ready for the challenge ahead and have made plays this season that were freaking unbelievable. Step-to-step Radim Vrbata is holding his own with the Sedins but there’s a BIG void between the first and second line and we need everyone to step up and bring their best game to win first round. We will need to master our 5 on 5 game in all aspects and maintain that domination throughout the series to move forward to the next level.

We simply have to give kudos where it belongs, to our new coach Willie Desjardins. His mere presence has seemed to bring a new spark to a very stalled team and it’s easy to see the entire team has confidence and sincere respect for their new leader which in turn seeps right back into the players. His direction and leadership has instilled a new sense of confidence in every team member and it shows on the ice.  http://www.hockeydb.com/ihdb/stats/pdisplay.php?pid=39968

Our continuing goal-tending soap opera has always been the biggest contention for the Canucks team and this year is no exception. After the severe knee injury Ryan Miller suffered in the New Year, we all held our breath. “Not again, I mean come on!” But Eddy Lack rose to the occasion with career highs for himself and stood tall in front of the net and kept us in the game. As West Vancouver Property Managers, we have our own playoff hockey pool happening, so get your office team involved and support the team! Whichever one that may be.

West Vancouver Home Owners – To Pool Or Not?