What’s Going On With The West Van Traffic? 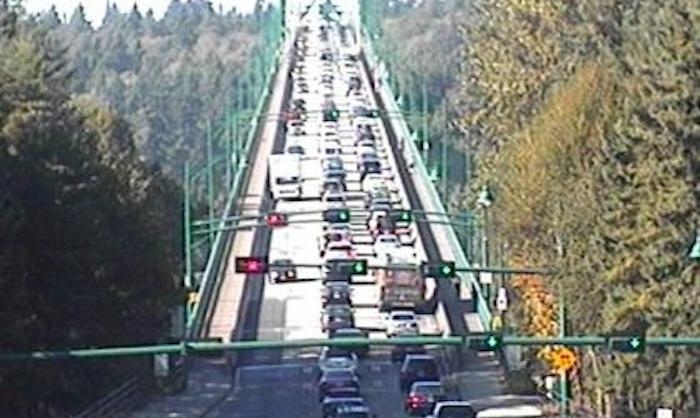 Traveling across the First Narrows over the Lions Gate Bridge has been considerably slower than usual, even during off-peak hours in both directions,

due to a bump on the bridge deck on the south end of the bridge.

The metal plate is 1.75-inches thick and is designed as a temporary road fixture to protect the bridge’s joints.

There is some confusion over the purpose of the temporary fixture as some social media users have falsely called it a “speed bump.”

The bridge deck is currently in the process of being repaved, and the latest work was performed over the weekend when some lanes were closed overnight to allow construction crews to access the site.
Drivers have been crossing the bridge at extremely slow speeds to avoid any potential major bounce or even damage to their vehicle.

Buses that rely on the bridge are also experiencing long delays, and in some cases they have been detoured due to the congestion.
But the provincial government says there should be no safety concern with traveling over the bump.

The plates will remain on the bridge for another month, when most repaving work is scheduled to be completed.

This article tries to explain the massive traffic jams that are plaguing ever person who relies on the Lions Gate bridge for daily commuting. As West Vancouver Property Managers, we have properties not only on the North Shore but also in downtown Vancouver and many other areas, so we need to cross the bridge several times a day. It is taking hours of extra time every single day to commute and it has become unbelievably frustrating. A normal 30 minute drive, now, can take up to 90 minutes and this is not even at rush hour. This obviously was very bad planning and only adds to the stress on the roads today.